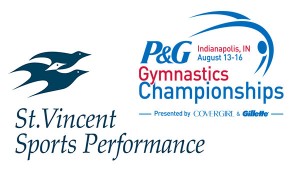 INDIANAPOLIS, Oct. 22, 2014 – St.Vincent Sports Performance, based in Indianapolis, Ind., and long-time partner of USA Gymnastics, has been named the official medical and performance nutrition provider for the 2015 P&G Gymnastics Championships, scheduled for Aug. 13-16 at Bankers Life Fieldhouse.

St.Vincent Sports Performance will provide on-site medical support for the 2015 P&G Championships, as well as performance nutrition-based initiatives and consulting. St.Vincent Sports Performance, established as a hospital-based program in 1987, specializes in comprehensive training for athletes by combining performance training, medicine, psychology and nutrition. An official partner of USA Gymnastics since 2006, the organization serves more than 29,000 athletes worldwide in an array of sports, including IndyCar, NFL, NBA, WNBA, MLB and other national governing body competitors.

All-session tickets are on sale now and include every competitive session. Prices range from $150-$495, plus applicable fees, based on seating location. Tickets may be purchased at Ticketmaster through www.ticketmaster.com, Ticketmaster charge by phone 1-800-745-3000 or at participating Walmart locations in Central Indiana and Bankers Life Fieldhouse Box Office. Tickets are also available at a discounted price through participating local gymnastics clubs.

The Indiana Sports Corp, Pacers Sports & Entertainment, the City of Indianapolis and the State of Indiana are the event’s local organizers. Indianapolis has served as the headquarters for USA Gymnastics since 1983.